Coronavirus and Your Right to Carry in Texas 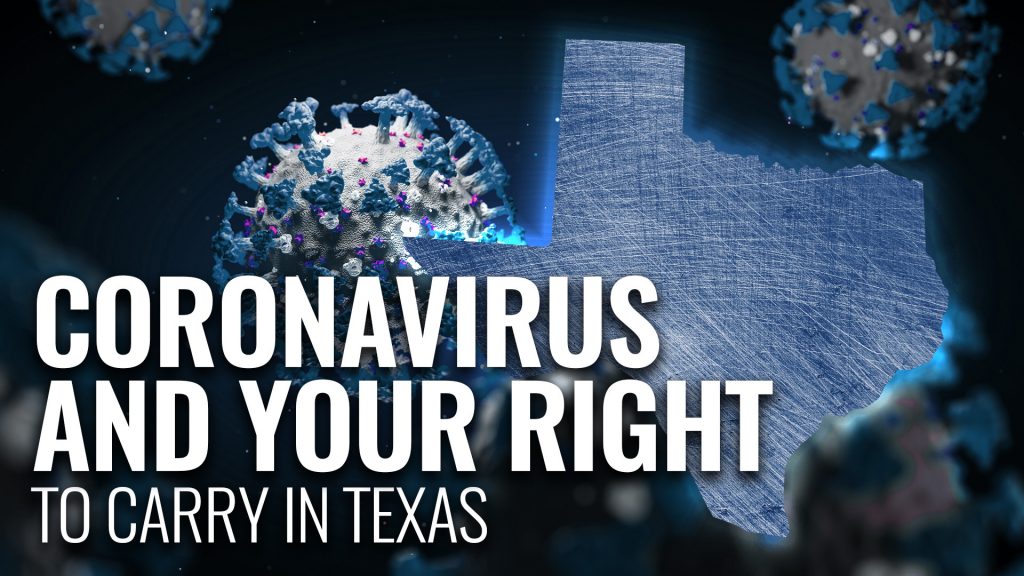 Coronavirus Disease 2019 (“COVID-19”) has traveled across the world at a frightening speed and, more likely than not, will impact your local community. President Trump even enacted a travel ban to and from mainland Europe. What measures, under Texas law, could local authorities in your county impose to try and stop its spread, and what are your rights as an License to Carry (“LTC”) holder during these periods?

If your local community undergoes one of the above declarations, you may find yourself within a quarantine zone. Texas Health and Safety Code Chapter 81 contains many of the tools available to Texas authorities in times of disaster or health emergencies. One such tool is a quarantine order applicable to an area, which requires the cooperation of local authorities (county commissioners’ courts, city councils, and mayors). See Texas Health & Safety Code Ann. § 81.085(b).

Under Texas Health and Safety Code § 81.085(j), peace officers may use reasonable force to secure a quarantine area and prevent an individual from entering or leaving. What happens if your neighborhood is subject to a quarantine order, but you decide to ignore that order and go to work? You could be arrested for a third-degree felony under the Texas Health and Safety Code § 81.085(h), which applies to anyone who knowingly fails or refuses to obey a rule, order, or instruction of the department or an order of instruction of a health authority issued under a department rule and published during an area quarantine.

Even more startling, a person could also be charged with a third-degree felony for refusing to disclose their immunization records if the Texas Department of State Health Services requests them. See Texas Health and Safety Code § 81.085(h)-(i).

Third-degree felonies in Texas carry a possible punishment of two to 10 years in prison and a fine up to $10,000, per criminal charge.

Unlike states of disaster for natural phenomenon like hurricanes or floods, if someone is quarantined, they’re likely not going to leave their home. It would be extremely unlikely and unprecedented for a lawful order to remove a person’s firearms from their possession inside of their home during one of these periods. Normal laws still apply, however, and if someone is suspected of committing a violent felony, this could impact their firearms rights.

These public health disasters may continue for up to 30 days and be renewed once by the commissioner for an additional 30 days under Texas Health and Safety Code § 81.082(d).

If ordered to evacuate their home, a person would most likely be taken to a secure facility where firearms could be lawfully restricted (with proper notice).

In the event a person is allowed to move freely within a public health-related state of disaster, recent changes made to the unlawful carry of a weapon statute (Texas Penal Code § 46.15(k)) prevent those who can lawfully possess firearms but do not have an LTC to carry their handguns during a state of disaster from being charged with the crime of unlawfully carrying a handgun while evacuating from an affected area during a declared state or local disaster, or while returning home to that area. This generally means that a person would be allowed to carry their handgun on or about their person when forced from their home after a declared state of emergency, even without a Texas LTC.

This protection from prosecution extends for one week after the disaster declaration, and the governor has the authority to extend the disaster period.

It is very important to note quarantine orders going into effect would be a brand-new phenomenon in Texas, and this area of law is very fluid. Different counties and law enforcement agencies may take very different measures in enforcing quarantine orders.

Good, law-abiding folks may find themselves being arrested for legally carrying a firearm under the catch-all penalty for knowingly or refusing to obey “a rule, order, or instruction of the Texas Department of State Health Services or an order of instruction of a health authority.” Texas Health & Safety Code § 81.085(h).

Texas Government Code § 418.184 allows a peace officer who is acting in the lawful execution of their official duties during a state of disaster to temporarily disarm a person if the officer reasonably believes it is immediately necessary for the officer’s or another person’s protection. However, the statute goes on to say that the officer shall return the firearm and any ammunition disarmed under this law before detaining the gun owner unless the officer arrests the gun owner for engaging in criminal activity or the firearm is evidence in a criminal investigation.

Additionally, Chapter 433 of the Texas Government Code details what powers are available to state authorities during a state of emergency, a separate type of 72-hour measure to control areas suffering from riots or unlawful assemblies by three or more people acting together by use of force or violence; if a clear and present danger of violence exists; or a natural man-made disaster occurs.

Texas Government Code § 433.0045 specifically addresses firearms rights during a state of emergency, and is almost identical to Texas Government Code § 418.184, but adds that a directive issued under Chapter 433 may not authorize the seizure or confiscation of firearms or ammunition from a person who is lawfully carrying or possessing them. An officer may still temporarily seize firearms and ammunition from a person during a state of emergency if immediately necessary for the officer’s or another person’s safety, but shall return them to the gun owner unless they arrest the gun owner for engaging in criminal activity or if the firearm is evidence in a criminal investigation.

If you find yourself in a situation where a law enforcement officer is ordering you to disarm, the best practice would be to remain calm, comply, and let your lawyer do the fighting and arguing for you if the police attempt to file charges against you.

If you have any questions about your gun rights during a state of disaster or quarantine order, call Texas LawShield and ask to speak with your Independent Program Attorney

The post Coronavirus and Your Right to Carry in Texas appeared first on U.S. & Texas LawShield.