Coronavirus and Your Right to Carry in North Carolina 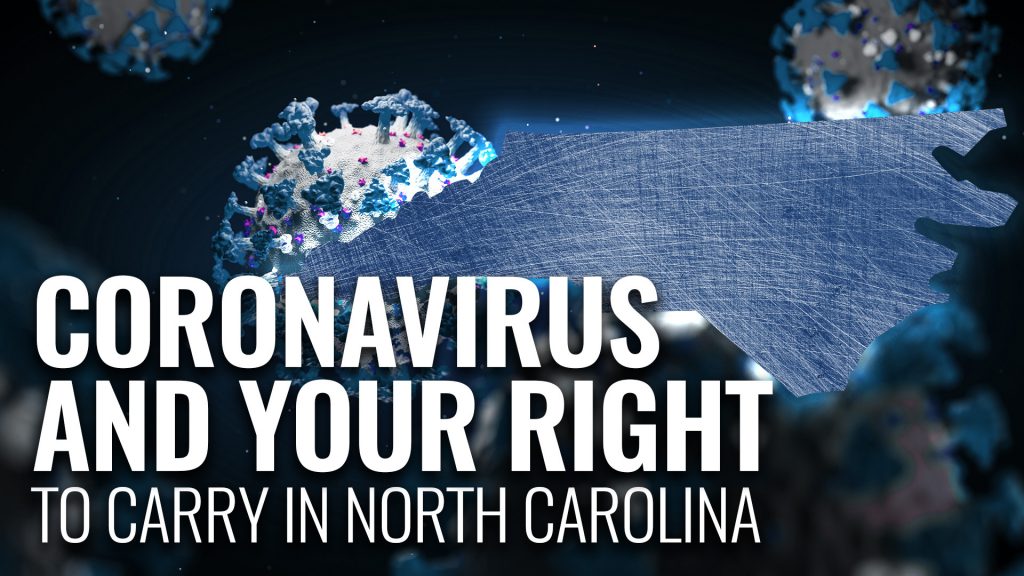 On March 10th, 2020, Governor Roy Cooper declared a state of emergency due to the presence of persons testing positive for COVID-19 in North Carolina. Key provisions in the order are similar to those enacted in a natural disaster.

Firearm Law During a State of Emergency

Please note, there is no law that would allow the state to take anyone’s firearms during a state of emergency. All North Carolina gun laws are still applicable in time of a state of emergency. So, unless you have Concealed Handgun License (“CHL”) you cannot carry your weapon in a concealed manner on your person. If transporting a firearm without a CHL, the firearm must either be in plain view or locked in your trunk. If your vehicle does not have a trunk it should be placed as far away from you as possible. It might even be a good idea to unload it.

State law grants the authority to the state health director and to local health directors to order isolation or quarantining of individuals. This authority may be delegated to another public official or employee. “Quarantine and isolation authority shall be exercised only when and so long as the public health is endangered, all other reasonable means for correcting the problem have been exhausted, and no less restrictive alternative exists.” N.C.G.S. § 130A-145(a).

It is a crime for an individual to refuse to comply with communicable disease control measures, regardless of whether an isolation or quarantine order has been issued to them. Such a violation is a misdemeanor punishable by up to two years confinement in a state prison hospital “or any other confinement facility designated for this purpose by the Secretary of Public Safety after consultation with the State Health Director.” N.C.G.S. § 130A-25.

The initial period of isolation or quarantine may not exceed 30 days. A person subject to isolation or quarantine has the right to appeal such an order to Superior Court and the appeal must be heard within 72 hours (excluding Saturdays and Sundays). The person challenging the isolation or quarantine order has the right to be represented by counsel, and if they are unable to retain an attorney one will be appointed to represent them. If the Court finds that the need to isolate or quarantine an individual has been established by preponderance of the evidence, the order shall remain in effect. If the person who issues the isolation or quarantine order determines that a 30-calendar-day limitation on freedom of movement or access is not adequate to protect the public health, they must institute in superior court in the county in which the limitation is imposed. An action to obtain an order extending the period of limitation or freedom of movement or access. Any extension may not exceed 30 days and multiple extensions may be sought. N.C.G.S. § 130A-145(d).

As of March 13, 2020, the Chief Justice of the North Carolina Supreme Court has ordered the closure of Superior and District Courts for 30 days. The closure may be extended for an additional 30 days. One exemption to the closures is proceedings to preserve the right to due process of law, such as appealing an order of isolation or quarantine.

The post Coronavirus and Your Right to Carry in North Carolina appeared first on U.S. & Texas LawShield.