Coronavirus and Your Right to Carry in Colorado 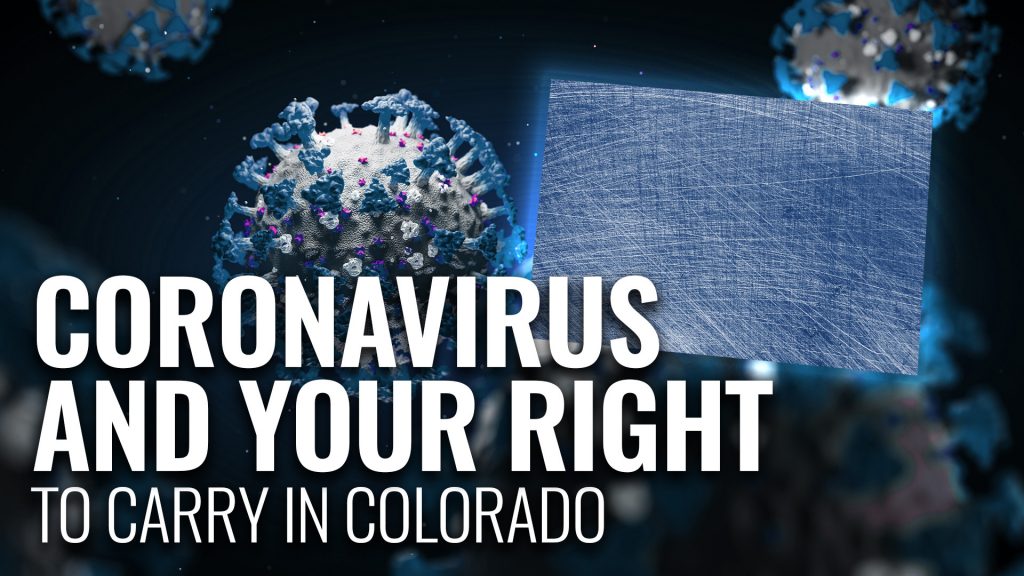 What the Law Says

A “disaster” is defined to include an “epidemic.”

Upon declaration of a disaster emergency, the governor becomes the “commander-in-chief of the organized and unorganized militia and all other forces available for emergency duty,” and may issue executive orders suspending state regulations, directing the utilization of state resources and personnel, commandeering private property as necessary to cope with the disaster or emergency, and directing evacuations.

The statute also establishes an “Expert Emergency Epidemic Response Committee,” which is tasked with creating a state disaster plan for epidemics, pursuant to which the governor may issue executive orders necessary to respond to an epidemic, including “isolating or quarantining persons or property.”

How It Affects You

Colorado’s governor, in fact, declared a State of Emergency regarding the novel Coronavirus on March 10, 2020, in which, among other things, he ordered the Department of Labor and Employment to issue emergency rules relating to:

The Expert Emergency Epidemic Response Committee also met to draft templates of orders allowing the governor to issue quarantine orders and the cancellation of public events or closure of buildings, though such measures have not been taken as yet on a state level (multiple local school districts have issued closure orders).

As pertinent to firearms, the Disaster Emergency Act gives the governor authority, during a declared disaster emergency, to “suspend or limit the sale, dispensing, or transportation of . . . firearms, explosives, or combustibles.”

It is also conceivable that the power to “commandeer private property” as commander-in-chief of the militia could be deemed to apply to firearms, though such measures would, of course, be much more likely in other forms of emergency defined by the statute: “civil disturbance, hostile military or paramilitary action, or a condition of riot, insurrection, or invasion,” than the current emergency declaration regarding a viral epidemic.

The statute setting forth the powers and duties of the Colorado Department of Health gives the Department the power to “establish, maintain, and enforce isolation and quarantine, and, in pursuance thereof and for this purpose only, to exercise such physical control over property and the persons of the people within this state as the department may find necessary for the protection of the public health.”

County public health agencies are similarly empowered to establish and enforce quarantines within their jurisdiction.  Colorado’s statutes and regulations do not appear to specifically set out penalties for violation of such quarantines.

For questions on what to do in the event of a State of Emergency, contact U.S. LawShield and ask to speak to your Independent Program Attorney.

The post Coronavirus and Your Right to Carry in Colorado appeared first on U.S. & Texas LawShield.