Can I Lend My Gun to Someone for Self-Defense? | Virginia 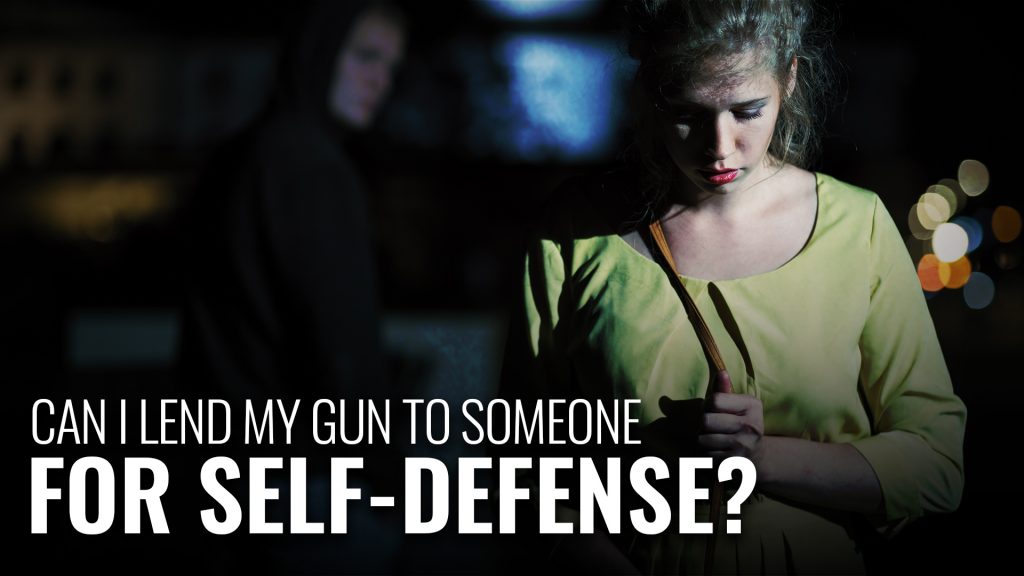 A buddy comes into town, and you decide to go hunting together; can you loan him a gun? A neighbor had her home broken into, and is afraid the burglars may return in the future; can you loan her a gun? Your brother-in-law is thinking about purchasing a new defensive handgun. But he wants to carry some of your firearms to get a feel for what fits him best, before buying. Can you loan him a gun?

In what situations, in Virginia, can you actually lend your firearm to someone else? This appears to be a simple question. But there are actually many layers that we need to examine before arriving at an accurate answer.

Things to consider #1: The type of firearm

The first question is what type of firearm are you trying to loan. Under federal law, there are restrictions on loaning any National Firearms Act (NFA) restricted weapons, such as short-barreled rifles or short-barreled shotguns, to anyone not specifically named as able to possess them in a trust or other governing document.

However, when discussing regular Title 1 firearms, such as standard rifles, shotguns, or pistols, the laws are fairly permissive, and allow the loan of such weapons in Virginia to anyone otherwise able to possess them.

Things to consider #2: The type of Residence

The next question to consider under federal law is the state of residence of the person you plan on loaning a weapon to. Are they a resident of your home state? Federal law at 18 USC 922(a)(5) says that it is unlawful for a person to “transfer, sell, trade, give, transport, or deliver any firearm to any person whom the transferor knows or has reasonable cause to believe does not reside in the State in which the transferor resides.”

However, this same law also provides an exception by saying that the prohibition does NOT apply to the “loan or rental of a firearm to any person for temporary use, for lawful sporting purposes.” So, if your buddy comes into town from out of state to hunt or target shoot with you, under federal law you may loan him a firearm. However, generally speaking, you may not loan this individual a firearm purely for a defensive purpose.

Things to consider #3: The age of the person

Another key consideration under Virginia law is the person’s age. According to Va. Code 18.2-308.7, the person you are loaning the weapon to must be over 18 years of age if you are loaning them either a handgun or an “assault firearm.” For the purposes of this section, the law defines “assault firearm” as any “(i) semi-automatic centerfire rifle or pistol which expels single or multiple projectiles by the action of an explosion of combustible material, and is equipped at the time of the offense with a magazine which will hold more than 20 rounds of ammunition, or designed by the manufacturer to accommodate a silencer, or equipped with a folding stock, or (ii) shotgun with a magazine which will hold more than seven rounds of the longest ammunition for which it is chambered.”

This restriction does not apply to children under 18 at their own home or property, or in the home or on the property of their parent, grandparent, or legal guardian. A child under 18 may also have a handgun or “assault firearm” on the property of another with the permission of both the parent or guardian of the child and the landowner’s written permission. This written permission needs to be with the minor, while on such property.

The final exception to allow minors to possess “assault firearms” is for “any person while carrying out his duties in the Armed Forces of the United States or the National Guard of this Commonwealth, or any other state.”

You also need to know…

Keep in mind that there are also two separate crimes contained in Va. Code 18.2-56.2 that may impact when you could loan a weapon to a child. The first is a penalty for recklessly allowing a child under the age of 14 to access any weapon, in such a manner that may endanger the child, and the second, contained in 18.2-56.2(B) makes it a crime to authorize a child under the age of 12 to use a weapon absent adult supervision.

Beyond worrying about age, you also need to make sure the person you’re lending a firearm to is eligible to possess weapons. This means that they cannot be barred by either state or federal law from possessing guns. This can be tricky because even a felony from 30 years ago could prevent someone from possessing firearms. For this reason, before loaning a gun, we recommend getting a written statement. It should be signed by the person you are loaning the firearm and state:

Finally, it would be a good practice to discuss the purpose of the loan. You want to make sure you don’t loan your weapon to someone who plans on going out to commit crimes with it! Should you loan your firearm to someone who goes out and commits a bank robbery with your weapon, you run the risk of both criminal prosecution as an accomplice, as well as a civil suit by anyone who suffers injuries during the robberies. For this reason, you need to be very cautious when loaning firearms.

If you have any questions about lending your handgun to a third party in Virginia, contact U.S. LawShield and ask to speak with an Independent Program Attorney.

The post Can I Lend My Gun to Someone for Self-Defense? | Virginia appeared first on U.S. & Texas LawShield.